My mother told me that men only want ONE thing.

I know you know what that one thing is — because whether you’re a man or a woman, you’ve heard this rumor about men.

Well… No. They really don’t.

Now, I’m not going to lie to you and say men don’t think about sex a lot, or want a lot of sex. But I can’t say with any proof that they’re all about the sex.

Such a claim would seem to suggest that men are one-dimensional in how they love, and that their efforts (in relationships) are geared toward one single outcome.

I simply cannot confirm that as true. Believe me, I’ve looked at men closely and in-depth. I’ve coached hundreds of men. I would know if their motivations (in love or otherwise) were strictly centered on sex.

We all know that “men only care about one thing” is really not a truth. And yet, it persists to create shame for men and judgment from women.

Here’s the thing…. When we act on this idea as if it were true, we put men’s sexuality in a really small box. We dwarf their capacity to give us the kind of physical interaction we actually crave as lovers.

If you hold a picture inside of you that your man is needy — and a hole you cannot fill — he’s ultimately going to feel himself become that hole. His capacity to be the powerful man, who can ravish and fill you, will diminish and weaken over time.

When men are minimized this way by their partners, they do become the desperate sexual beings we judge them to be — not because that is how they authentically are. But because they’re being starved of sex and feminine warmth! 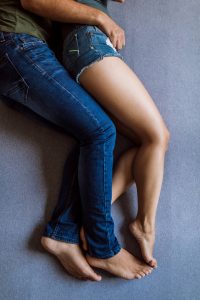 Men need sex with their partners to get into their hearts. This makes them really different from women.

When men are denied that opportunity, over time they become depressed and hopeless in the same way a woman does when her man is not there for her emotionally.

No doubt there are men out there that are desperate, sexually, and seemingly insatiable.

I’ve met my share. In my experience, these are the men who haven’t experienced heart-connected sex or a woman who was truly open to them. They are also the men who never get enough sex, so getting sex becomes their sole focus rather than the quality and depth of their lovemaking.

If we women can start to let go of the idea that men are all about the sex, and see them instead as human beings seeking connection and heart-opening through lovemaking, we can make a different kind of invitation.

The more a woman’s invitation to make love is welcoming and open, the easier it is for a man to find his heart in lovemaking. If a woman focuses on her surrender and her capacity to receive, what has perhaps seemed like shallow, unfulfilling sex to her before, can grow and expand into something beautiful.

Shaming men about their desires, of course, only has the opposite effect.

I’d love to hear what you have to say on this subject. Do respond to this email and I’ll respond to you!